The Tree of Travellers

The Ravenala, better known as the tree of travellers (Ravenala madagascariensis), belongs to the strelitzia family, although it looks more like a palm tree. Although it is now widespread all over the world and is even cultivated as a decoration plant in some homes, it originates from Madagascar and only occurs naturally there.

Ravenalas grow to an average height of around 15 metres and are particularly known for their typical, semicircular, long leaves, which can reach a length of up to three metres. The trunk can grow up to 30 cm thick. The plant got its name from its versatile uses: It provides a roof over the traveller’s head when it rains – even today many huts in Madagascar are covered with Ravenala leaves and built from the stems of the plant. Travellers can also quench their thirst with the water collecting in the leaf axils of the Ravenala, or satisfy their hunger through the edible (but somewhat floury) seeds and leaf tips. Finally, the Ravenala serves as an orientation for travellers: it usually grows in an east-west direction.

The Madagascans distinguish four forms of the traveler’s tree:

One is the Malama, which stands out as a young plant due to the spiral arrangement of its leaves. It is assumed that this special form is particularly effective in capturing the light necessary for growth at the bottom of the rainforest. Accordingly, Malama can only be found in the dense rainforests of the highlands, for example around Andasibe or Ranomafana. It is probably the most evolutionary Ravenala with the most special adaptation.

Another form is the slightly faster growing Hiranirana, which is characterised by the alternate arrangement of its relatively wide leaves and well-formed leaf stalks. It grows at altitudes between 600 and 900 m, and can also be found here and there in the lowlands. On the east coast, where cyclones tear large holes into the forests every year, the Hiranirana uses the gaps that have formed and grows on the destroyed woodlands.

The Bemavo is the third and most common form of the traveller’s tree in Madagascar, and is mainly found between 200 and 600 metres. Thanks to its good adaptability, however, it can also be found up to 1000 m. Bemavo is mainly found in dry savannahs, open secondary vegetation and on steep slopes; it does not grow in dense forests. It copes best with all forms of drought and deforested areas and reaches the highest height of up to 25 metres. In the highlands of Madagascar, strongly marked by slash-and-burn, there are even Ravenala forests, in which there are almost only Bemavos. The leaves of the Bemavo are perfectly fanned all their life.

The last form of Ravenala that the Madagascans know is the Horonorona. It is similar to the Bemavo and always keeps the perfect fan, but overall it is a little smaller and probably the most original Ravenala. The Horonorona preferentially grows below 300 m height, and is particularly common in small valleys directly above rivers or in moist, swampy areas directly on the coast. What is unusual about this form is that it can reproduce through smaller, own root-forming strains that grow out of the old main stem.

All other Ravenalas are pollinated mainly with the help of birds that sit on the bracts to reach the nectar in the flowers below. The flowers are small, white and relatively inconspicuous. If a bird touches it with its beak, the flower literally explodes and distributes its pollen over the bird, which then takes it to the next Ravenala. Depending on the region, ruffed lemurs also pollinate, making the traveller’s tree an even more special plant: Few species worldwide are pollinated by mammals.

If a Ravenala is fertilised, it forms long capsule fruits in which the bright blue seeds are located. They need special conditions to germinate successfully and become an impressive tree. In the case of the freshly sprouting plants, the trunk of the tree is still under the ground, it takes years until the typical crown of the Ravenala rises into the air. When growing, the Ravenala is a symbol of the mora, mora or “take it easy” of Madagascar: it grows slowly and deliberately, sprouting only 10 to 15 leaves per year.

Due to its striking shape and its many uses, the traveler’s tree quickly became Madagascar’s heraldic plant. Since 1922 the Ravenala has adorned Madagascar’s official seal with its stylized palm fronds, and since the 1960s its silhouette has been included in the logo of the state-owned airline Air Madagascar.

According to legend, the Tree of Travelers can even fulfill wishes – but of course only travelers who really make it to Madagascar. 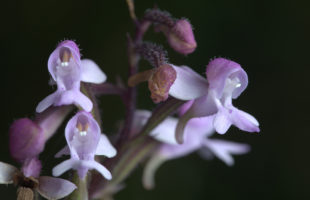 The 1000 orchids of Madagascar

The little brother of the giraffe-necked weevil

A true giant among the frogs of Madagascar is the White-lipped Bright-eyed Frog. Its scientific …