In the west of Madagascar, far from roads and larger cities, lies the dry forest of Beanka. Although by far not as well known as the world-famous Tsingy de Bemaraha a little further south, this area also has its own Tsingys. Malagasy Tsingy, that’s karst rock shaped like meter-high needle peaks. A complicated system of caves and gorges winds through the tsingys of Beanka, which are almost completely unexplored. Few people even make it here. But in 2012, times changed: an international team of researchers took on the arduous journey. For the first time, they mapped the area. Spurred on by the challenge of this remote, inhospitable region, they returned to Beanka just one year later – and made an incredible discovery that eventually even led to the designation of a protected area a little later: they found ancient paintings on the walls of the Andriamamelo cave.

At a height of five meters, figures and symbols were once painted with black pigments on the light karst rock. Scientists estimate the age of the cave paintings at 1000 to 2000 years. A crocodile is clearly visible, as is a turtle. One scene probably shows an elephant bird, a succulent plant, and a shaman wearing bird feathers on his head and some kind of mask with a beak. Another depicts a hunting scenario: A giant sloth lemur lies on its back. To its right are two smaller animals, probably dogs, and to its left is a hunter with an indicated bow and arrow. Besides the sheer fascination that cave art from so long ago can still be found in Madagascar, they also prove that humans and megafauna once lived in parallel on the island.

A little further down, a kind of labyrinth has been applied to the rock. Above it, there is a writing, which is unfortunately only readable in parts today. These are characters that are also used in the Sorabe. Sorabe is the name of several Malagasy scripts from the 15th century, which use Arabic characters similar to the Javanese Pegon. Some rather abstract characters in the cave paintings in Andriamamelo are reminiscent of 2000-year-old cave paintings on the island of Borneo. That the ancestors of the different Malagasy tribes possibly even came from Borneo itself does not seem as far-fetched today as it did a few years ago. It is now assumed that it was Indonesians who first reached and settled Madagascar with their boats.

What is unusual about the paintings of Andriamamelo is that not a single one of the 44 symbols and figures are associated with zebus. Cave paintings from the south of Madagascar consisted almost only of them, but in Andriamamelo they are completely missing. Also unexplained is the meaning of the so-called M-figures, of which quite a few are found in the paintings. At first glance, they resemble simple stick figures. In Amharic, which is spoken in Ethiopia, there is an expression that looks the same and sounds phonetically very similar in the Austronesian languages. It stands for “breath of life” or “breath”, which would rather lead to a meaning of the M-figures in the course of ceremonial sacrifices or magical rituals. The symbol is also found in the Tifinah script of the Tuareg in the Sahara.

The Malagasy who live near the cave today say that the name Andriamamelo means “noble creator” or “honorable giver of life”. Andriamamelo was said to have been a mpisikidy, a soothsayer who could foresee the future from tamarind seeds. Has he and his followers been responsible for the cave paintings?

The cave paintings of Andriamamelo are theoretically accessible to everyone. Practically not: The location of the cave itself in the west of Madagascar is so far away from any drivable roads that, on the one hand, it is very difficult to get there even with all-terrain vehicles above ground. On the other hand, there is no infrastructure on-site in the neighboring village of Anahidrano. The lonely location is at the same time the protection of the paintings: Where no one can get to, no one can destroy anything. It is quite possible that deeper in the caves other primeval treasures are waiting to be discovered and have been lying unnoticed in their slumber for centuries.

Worth reading and seeing on the subject:
Teilen
zurück Identification help for Ravenalas
weiter The chameleon that was thought to be lost

Wooly lemurs: everything for the family

The chameleon that was thought to be lost 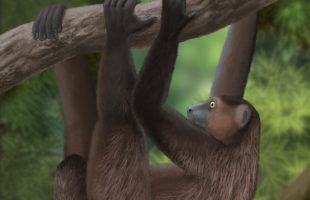