Hectic, stress and urgent appointments: In Madagascar you can leave all this behind you. Time is of no use here outside the cities. “Mora mora” is often the first thing you hear as a traveller in Madagascar – often at the visa counter. It means “slow, slow” or “take it easy” and reflects briefly and concisely the attitude to life of most Madagascans. Everything takes time, you don’t rush, and something rarely happens quickly. One comes to appointments a little later than announced, and in the countryside there are often no clocks at all, whose time one could have in mind. Busses, especially Taxibrousse, also tend to follow the existing timetables rather laxly. Delays are more the rule than the exception, even on flights. Room bookings are sometimes lost because nobody has written them down. And it’s a little messy here and there. Most Madagascans accept this with a deep serenity. If something doesn’t work as planned, you just wait for the next opportunity. As a traveller, this attitude to life can easily be confused with indifference. It seems that many Madagascans don’t care about problems – they usually do. In Madagascar, people just take a lot more time to get to grips with things. Haste and hustle do not exist here. 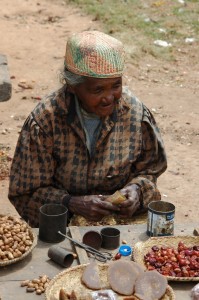 In rural areas, this timelessness and patience has its origins primarily in the fact that a large part of the Malagasy population has to live without electricity. People get up with the sun and go to sleep at nightfall. There are no distinct seasons due to the proximity to the equator, the sun shines all year round for about 12 hours andit is dark for the other 12 hours. Anything not done by evening will be postponed until tomorrow. Only in cities, hotels or lodges as well as touristically marketed regions there is a nightlife, and the rhythm of life has shifted into the evening hours. Here, as everywhere in the world, appointments are made – and usually kept. But also in urban space Mora mora dominates life as an omnipresent mantra: Everything takes time. Patience and forbearance are therefore good companions in Madagascar.

So if you are a punctuality fanatic and mutate into a choleric if something goes wrong as planned, Madagascar is the wrong destination for you. But anyone who gets involved with the country and its people will appreciate the timelessness and the incredible patience of the Madagascans. Because there is a good solution for almost everything in Madagascar – but not immediately.

The climate in Madagascar