Kings of the sky: Madagascar’s birds

Almost 300 different bird species inhabit Madagascar, half of them are endemic. The country’s flagship species, the Madagascar fish eagle or Ankoay (Haliaeetus vociferoides), is a bird of prey. It’s the biggest one in Madagascar and critically endangered, not even more than 100 pairs are known to breed on the island. Other birds of prey are the Madagascar serpent eagle (Eutriorchis astur), which had been already considered to be extinct for years, and the Peregrine falcon (Falco peregrinus radama). The last one is the heraldic animal of the royal palace (Rova) of the capital, Tana, and – how could it be else with rare animals – critically endangered, too. The largest owl of Madagascar, which lives very hidden and secretly, is the Madagascan owl (Asio madagascariensis). Still today, scientists know only a few things about this mysterious bird.

Some kind of passerine bird is the endemic Vanga, which has developed several completely different looking species in Madagascar, isolated from each other similar to Darwin’s finches at Galapagos island. While the big Sickle-billed Vanga (Falculea palliata) has a long, sickle-like benched beak, e.g. the Helmet Vanga (Euryceros prevostii) is equipped with a very thick, bulged beak, which reaches its forehead. Among singing birds of Madagascar, the Drongos are widely distributed – fearless, dark feathered birds with forked tails (like the Crested Drongo). Some species of these insect-eaters wear beautiful decorative plume at their tail. Travelers, who are really patient, can maybe luckily discover small Malagasy kingfisher (Corythornis vintsioides) at lakes and waters.

And even if you’re not really interested in birds: Sooner or later, you will see the Madagascar weaver or red Fody at the island. Similar to sparrows in Europe, this bird conquered all kinds of habitats. During mating season,  the otherwise orange-yellow males change their colors to bright red, only the eyes spare a black mask. Likely colorful, but much less distributed are sunbirds (Nectariniidae). With their benched, small beak they resemble hummingbirds, and like them, they suck nectar from colorful flowers. Even parrots have found their way to live on the island inside the Indian Ocean. The Lesser and Greater Vasa Parrot remain simply black, but they can compensate their few colors easily with their really loud voices compared to other Malagasy birds. The third unique parrot of Madagascar is the grey-headed lovebird, a pretty little one with white-green feathers.

At Lac Alaotra at Madagascar’s east coast, the last individuals of the extremely rare Madagascar pochard (Aythya innotata) try to breed and therefore save their species. Biologists consider this diving duck the rarest worldwide today because some years ago, they couldn’t find more than 20 single animals in the whole country. It sounds unusual to tell from flamingos in Madagascar, but these animals come here from Africa to breed in big swarms undisturbed at a big salt lake in the South of the island. The salty water is no problem for them – instead, they even drink it.

In short: From Crested Coua to Frigatebird, Albatrosses, Velvet Asity, Bee Eater, Malagasy paradise flycatcher, Ibises, and Giant Coua – if you’re a bird lover and don’t hit pay dirt in Madagascar, you probably overslept your holidays at the beach.

Teilen
zurück Insects, arthropods and arachnids in general
weiter Other mammals in general 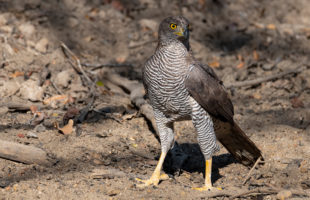 In the southwest and deep south of Madagascar, you can encounter it: The Lesser Hedgehog …