Until a few years ago, whale sharks, Rhincodon typus, had never been heard of in connection with Madagascar. Today Madagascar is the absolute insider tip for anyone who wants to experience whale sharks up close.

The life of whale sharks is still almost unknown

Whale sharks belong to the nurse sharks. This makes them the largest fish in the world. On average, they grow to a length of three to twelve meters and weigh up to twelve tons. Anecdotal reports, which are probably more likely to be attributed to fishing lore, even speak of up to 20 meters. That would be about the length of a tandem bus. Around Madagascar, mainly young whale sharks are on the move. Accordingly, the animals reach here rather four to ten meters in total length. That would be a normal bus instead of a tandem bus – still more than impressive for a fish!

As big as whale sharks may be, however, their food is very small. They feed on plankton, tiny microorganisms, and algae, which they filter out of the seawater. Depending on their fishing grounds, a jellyfish, a bonito or an octopus may be on their diet, too. When feeding, whale sharks are often seen standing vertically in the water, with their heads towards the surface. The “whale” in the name also comes from the filtering of the seawater, because this method of feeding is otherwise only known from baleen whales. A single whale shark eats up to 200 kilograms of plankton in one day.

Whale sharks hatch from eggs while still in the mother, which then gives birth to live young. A female can be pregnant with up to 300 young of various developmental stages at one time. It is thought that the female can even time the optimal birth to give her offspring the best start in life. The location of the whale shark nurseries is still a mystery. Just like the rest of the majestic giants’ lives – no one has ever observed whale sharks mating or giving birth. And just as little is known about where adult whale sharks spend the approximately 100 years of their lives. And so the knowledge about whale sharks is mainly anecdotal – for example, a single male once dived almost 2000 m deep.

In September the whale sharks come to Madagascar

Only one thing is certain: Whale sharks spend their lives migrating through the ocean. They prefer to swim in tropical waters with temperatures between 21 and 25°C. Where there are particularly nutrient-rich waters, they also come seasonally to the coast. In Madagascar, the whale shark season begins in September. It peaks in October and November before leveling off again in December.

Around the island of Nosy Be on the northwest coast are the places that are visited particularly intensively by young whale sharks. On Nosy Be some diving schools, as well as protection and research projects, have been established in the meantime. The Madagascar Whale Shark Project (MWSP) has been observing whale sharks off the island since 2016 and even tracks individual whale sharks with GPS transmitters. Over 400 different individuals have already been identified.

Whale sharks are in fact very easy to distinguish in photographs. Each whale shark has a unique, unmistakable dot pattern, similar to a human fingerprint. This makes it possible to recognize an individual animal even after years. The bright dots also give the whale shark its name in Malagasy: Marokintana means “many little stars”.

The giants of the seas are threatened with extinction

The IUCN Red List now lists whale sharks as endangered. In the last 75 years, the global population has been reduced by more than half. Humans are responsible for this: Intensified fishing, finning (cutting off fins) for obscure Asian food markets and increasing shipping traffic make it difficult for whale sharks to swim their way undisturbed. Around Madagascar, it is mainly Chinese fleets that have young whale sharks as bycatch in their nets or even fish them specifically. In addition, ship propellers repeatedly cause serious injuries. Observations around Madagascar have shown that more than one-third of the whale sharks swimming there bear scars from ship contact. Protection from overfishing is difficult to enforce. The wide migrations of whale sharks, which know no national boundaries, leave the designation of individual marine protected areas for these fish rather ineffective. 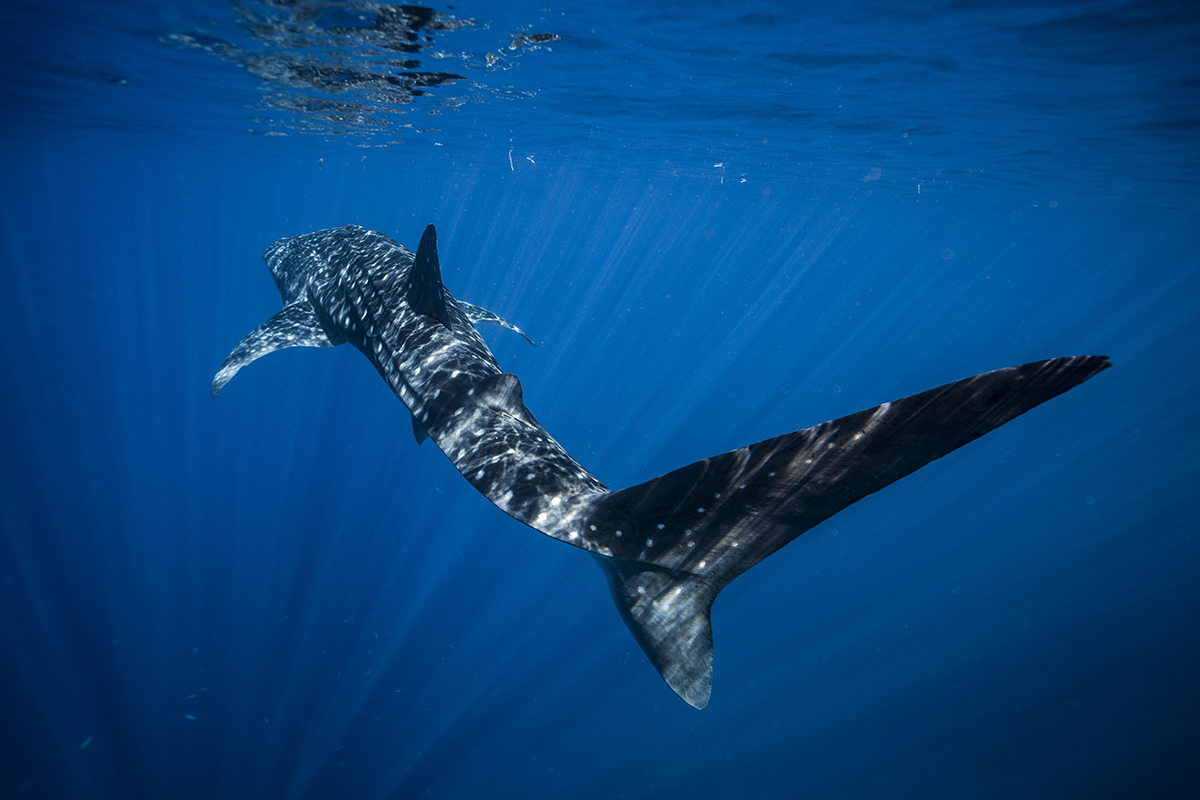 In Madagascar, the chances to see whale sharks and to swim with them are extremely good in October and November. But not only because of the very good sighting chances Madagascar is a highlight for friends of the big fish. There are not only whale sharks, but also different kinds of dolphins, devil rays, rare Omura whales, and a variety of sea turtles to admire. And the most important thing: untouched nature. Madagascar is visited by not a fraction of the tourists who visit the Philippines, Honduras, or Mexico. In Madagascar, the groups of visitors are usually very small. Whale shark tourism is just starting to pick up and is not yet comparable to the better-known hot spots around the world. Therefore, nothing stands in the way of an unforgettable experience with whale sharks in Madagascar. And to swim with the gentle, harmless giants of the seas – that is so unforgettable that you should definitely have experienced it.

Once hunted for their tortoiseshell, now threatened with extinction Five species of sea turtles are …