The Aye-Aye and I

Content description:
In 1963, Gerald Durell founded Durell Wildlife Conservation Trust which is famous today far beyond England’s borders and cares for conservation of threatened animals worldwide.  This book is a travelogue from his last expedition to Madagascar in 1990. His mission: Catching rare animals to breed them in captivity and zoos outside of Madagascar, and thus safe the species’ survival. And so he break up with his team to find rare tortoises in the dry forests of Kirindy. He also visits lake Alaotra to look for the extremely endangered Alaotran gentle lemur. In Mananara, he is challenged by a very special inhabitant of the red island: The Aye-Aye.

Our evaluation:
This small book does not include pictures and does not show off with high quality paper. But it is a humorous narration about an expedition that could take place nowadays with almost the same problems. Since 1990, many things in Madagascar hardly have changed obviously. Mora mora, curious children, fadys, disappearing guides, bad roads, tasty food and provisionally repaired rust buckets on tires: Still today you can find all these on the island. If you have been to Madagascar before, we would strongly recommend this paperback to you. Durrell frankly speaks about his life during the expedition. And he he has a lot of hilarious ancedotes to tell!

Notice: The book was published in 1992, so there exist various issues and reprints with different covers, as hard cover or paperback, brand new or  tattered. In this evaluation, we only refer to the pictured paperback issue that is still available unused in bookstores.

Note:
Thanks to the publisher for their kind consent to publish this review. 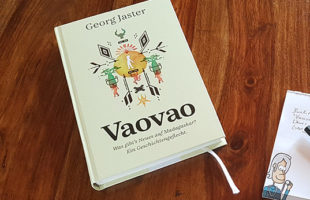