Zoky Be Flora and Fauna, Reptiles

Panther chameleons (Furcifer pardalis) belong to the most famous inhabitants of Madagascar and regularly populate the coastal areas of northwest Madagascar, across the north and on the east coast down to about 120 kilometres south of Toamasina (Tamatave). There seem to be no particular favourites among the populated habitats, even if one sees them particularly well in open, bush-covered areas. You can find these lizards in plantations, lowland rainforests and gallery forests, often even in gardens of human settlements. Panther chameleons introduced to Mauritius and La Réunion have successfully established themselves there due to their great adaptability. Originally, they only occur in Madagascar.

Panther chameleons are famous for their extremely colourful variety, with which hardly any other reptile can compete worldwide. Whether bright red with white banding or blue, yellow and green – everyone should find a personal favourite with this species. Along with the distribution areas of the panther chameleon, the males’ basic colour changes from place to place. You call these differences are called locales. In their names they always go along with the places where the animals were found, usually village or island names. In addition to the bright colours, panther chameleons, like all chameleons, are also known for their ability to change colours. Contrary to many myths, however, chameleons do not adapt to their background, but express their mood by changing the colour of the skin, communicate with it and use darker colours to warm up in the morning sun. Each animal also has a limited “paint pot”, and cannot take on any color. 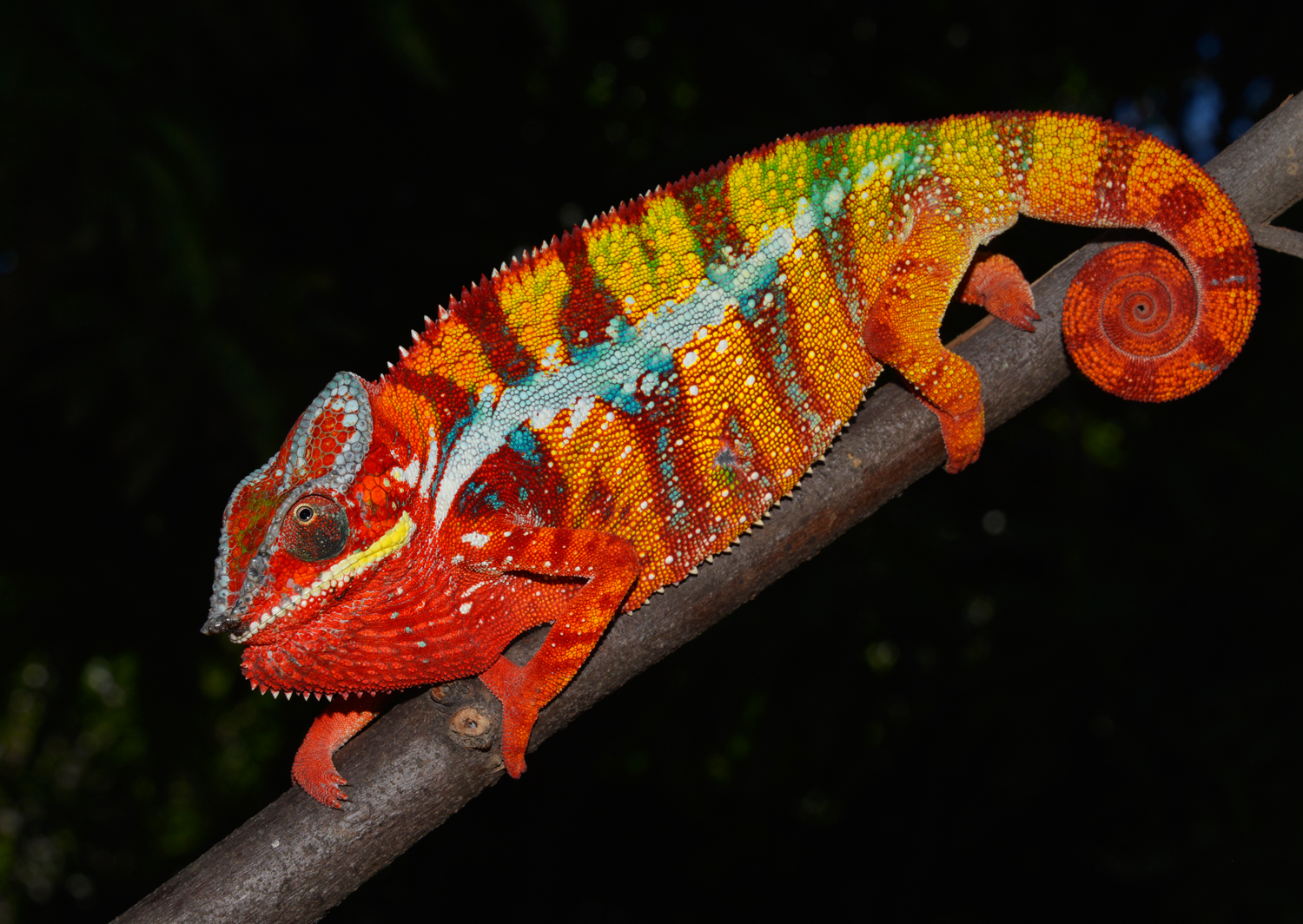 Another bizarre peculiarity is the eyes of the animals. Chameleon eyes can be moved independently and cover an impressive 342° field of view. They are therefore part of many legends in Madagascar, and only a few people on the island voluntarily touch chameleons. One of the many legends tells that chameleons can see into the future with one eye and into the past with one. The shooting tongue is another special feature: the tongue is hurled out of the mouth in a flash to catch insects with the thickened end. The tongue of a panther chameleon can become one and a half times as long as the chameleon itself.

The life of a panther chameleon begins with hatching from an egg, usually in the rainy season. At this time, the small panther chameleons have the best food supply to grow quickly. But many predators see the young chameleons as a welcome change in the menu: Birds, lemurs, larger chameleons and now unfortunately also many introduced domestic cats ensure that only a small part of the hatched panther chameleons make it into adulthood. With a total length of about 50 cm, panther chameleons belong to the larger chameleon species. The female animals of this type become including tail maximally 35 cm long and are coloured in contrast to the males rather inconspicuously orange or pink. The male panther chameleons have a larger, slightly forked nasal process and thickening at the tail root, which is caused by the two hemipenes pockets. By the way, these males are rather well-equipped – they have two penes instead of only one. 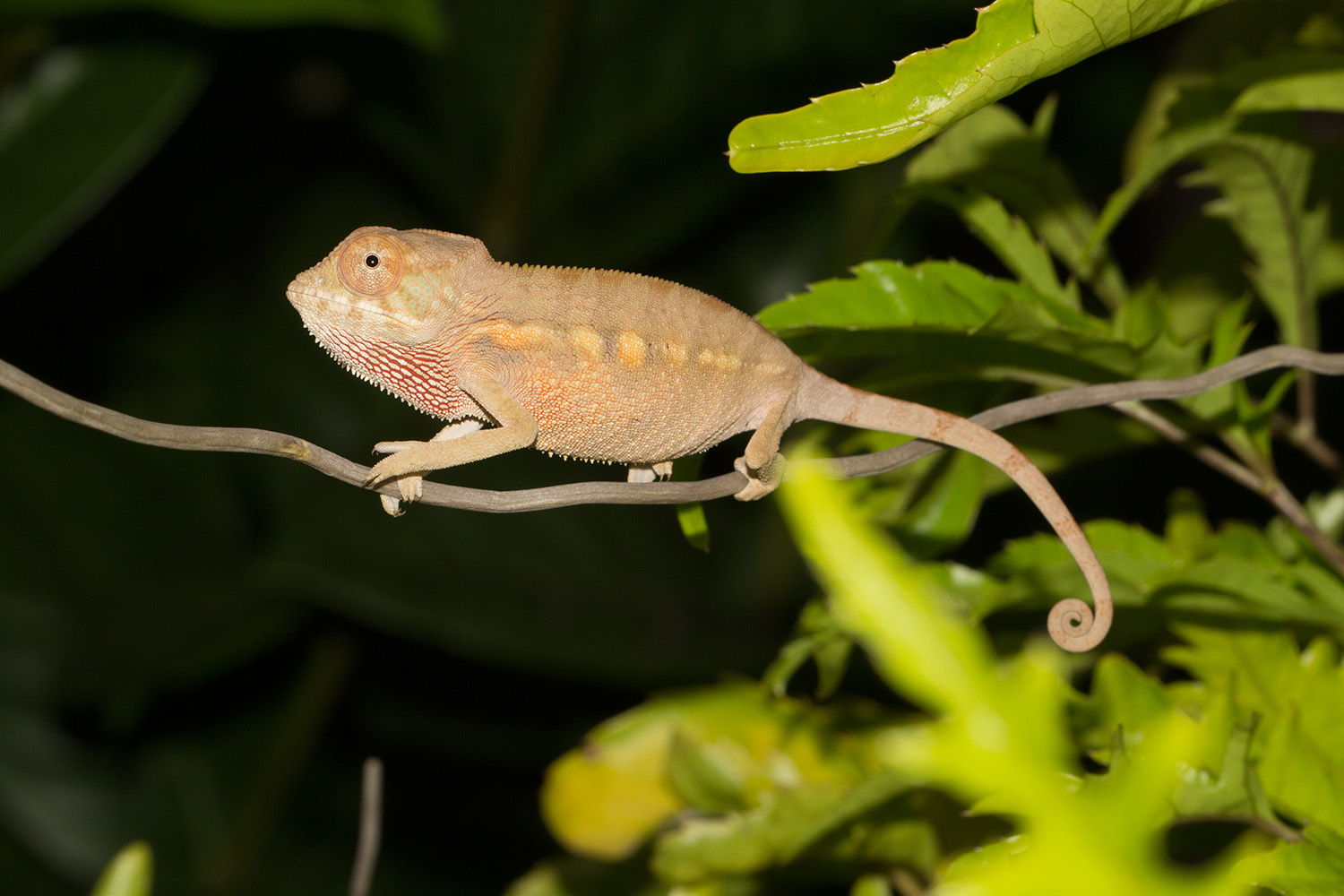 After about half a year to a year, panther chameleons mate for the first time. To impress a female, the males show their brightest colours and nod their heads towards the adored one. If the female is not yet ready, it fends off the advances hissing and biting. In the best case, mating occurs. If this was successful, the colour of the female changes a little, and after a good month, she lays 20 to 30 white, oval, small eggs. To do this, a hole is laboriously dug in soft ground for hours and later covered so carefully that everything looks exactly as before. The female then goes her way again and no longer cares about the offspring. After about seven to eight months, the young panther chameleons hatch out of their eggs, work their way out of the low hole and climb up nearby bushes. They are immediately independent of their parents and can hunt insects on their first day of life. Then the resume of a panther chameleon begins again. 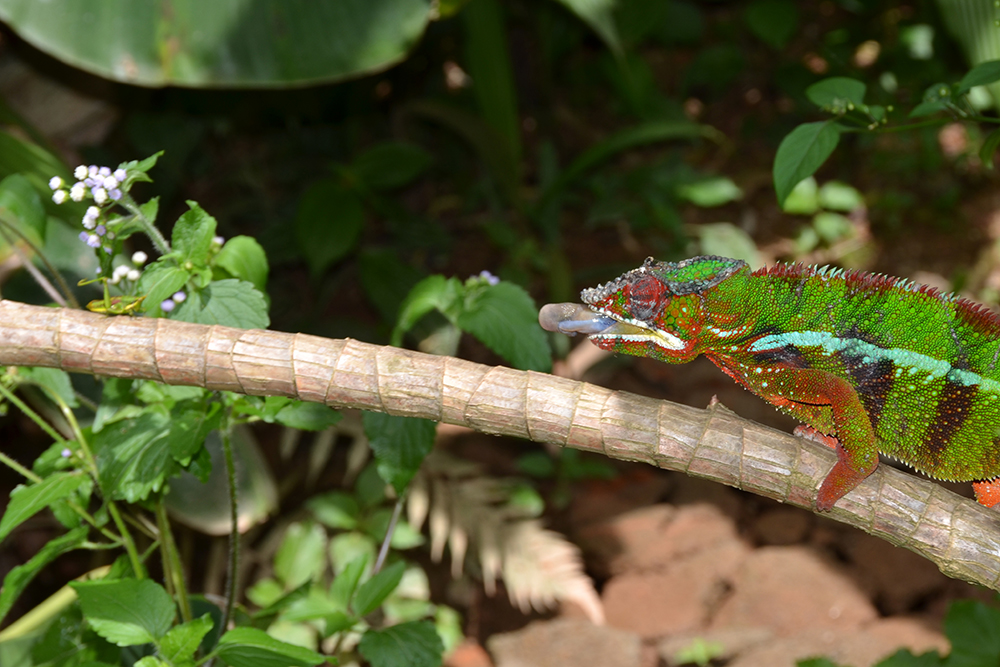