Especially the rainforests of Madagascar offer an abundance of different frogs for observation and discovery. Almost 4% of the world’s amphibian fauna is found on the island. Especially in the rainy areas on the east coast, you can find countless different species in a small area. In the rainy season, the croaking, chirping, and chirping of the courtship males can be heard far and forms the typical evening soundscape of the rain forest.

There are only a few species of disc borer (Dicroglossidae), such as the widespread aquatic Madagascar frog. The smaller reed frogs (Heterixalus) often come up with great colors. These include the sky blue reed frog (Heterixalus madagascariensis).

The largest frog family on the island are the so-called Madagascar frogs, which also include the well-known little Ginger Tree Frog and the Fiery Red Frog (Boophis pyrrhus), which is very common in Andasibe. They only occur here and a few more on the island of Mayotte. Most species of this family are very small (up to a maximum length of 40 mm), but very colorful. Some exceptions such as Boophis madagascariensis or Boophis albilabris are becoming significantly larger. From dots over stripes, conspicuous eye colors, and colored bellies and feet contrasting to the rest of the body, every frog lover among the Madagascar frogs will surely find his favorite among the many Boophis, Blommersia, Mantella, Guibemantis, Gephyromantis andMantidactylus species.

The Madagascar colored frogs (Mantella), which look similar to the poison dart frogs of South America, also belong to the Madagascar frogs. Despite their similarity, they are not related to the poison dart frogs, but some species actually have skin toxins. All these frogs are completely harmless to humans. One can therefore enjoy the bright colors of Mantella nigricans, Mantella laevigata, and their relatives completely undisturbed.

Also beautifully colored are the narrow-mouthed frogs similar externally to the horn frogs. Narrow mouth frogs include Scaphiophryne gottlebei, named Gottlebe after the German immigrant, or Scaphiophryne marmorata, extremely well camouflaged on lichens. The latter camouflage themselves so well that they are not visible on mossed surfaces even when standing directly in front of them. Tiny creatures such as the many Plethodontohyla, Anodonthyla, Platypelis, and Stumpffia species of Madagascar also belong to the narrow-mouthed frogs.

The tomato frog (Dyscophus guineti and antongilii), known for its keeping in terrariums and many zoos, has its original home in Madagascar, where the somewhat clumsy, deep red or yellow frogs can be found well in some areas.

Madagascar’s amphibian world still offers many undiscovered treasures. In the last few years alone, more than a hundred new frog species have been described from the island. Countless others are still waiting to be discovered. It is therefore not uncommon for travellers to be unable to clearly identify the frogs they photograph. The best time for amphibians to observe and travel in Madagascar is the weeks immediately after the rainy season when the roads are passable again, but it is not too dry. If you want to see a particularly large number of frogs or specific species, you should contact a specialist travel agent. With the right guides, you have the best chance to discover the small natural wonders of the red island. 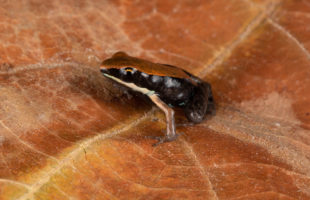 Madagascar is home to many frogs that are found nowhere else in the world. One …