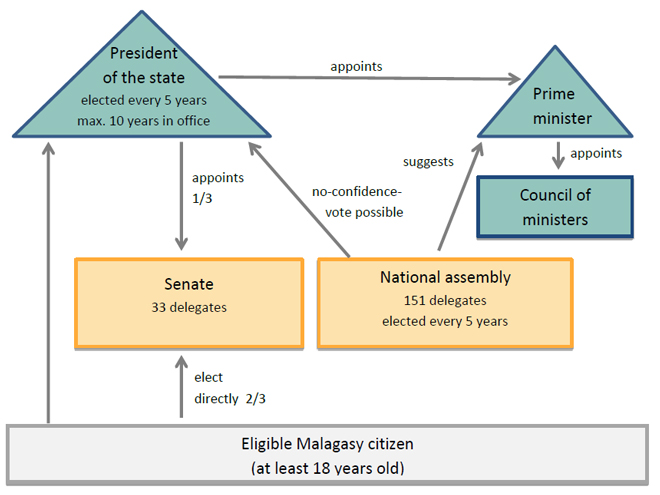 Madagascar currently has a semi-presidential system of government and is officially a democratic republic called “Republic of Madagascar”.

The President is elected directly every five years by Malagasy citizens. However, he may run for office no more than twice, i.e. for a maximum of ten years. The President appoints the Prime Minister (who must be sent by the National Assembly) and is also Chairman of the Council of Ministers. The Prime Minister in turn appoints the ministers. All ministers submit annual reports, the content of which they must justify to the National Assembly.

The members of the National Assembly are directly elected by the citizens every five years, as is the case with the President. They have the right to table a motion of censure against the President and set up 31 commissions consisting of at least 15 and at most 30 members (e.g. defence, strategic resources, energy and water, home and decentralisation, education and animal welfare, public health). Most MEPs belong to parties, but there are many micro-parties with only one or two MEPs. It is therefore often difficult to form sufficient majorities for votes.

The opposition in parliament has the right to send written questions to any minister. These will be published in the Journal officiel de la république together with the corresponding answers. There will also be a monthly round of questions, which will be broadcast live on public television and radio. Parliament is entitled to hold hearings of ministers on certain issues.

Legislative initiatives can be introduced by both chambers or the government. A bill goes through both chambers and is discussed in detail there. If the Senate and National Assembly do not agree on the content and adoption of a bill, the bill will be submitted to a mediation committee. Only if the latter also fails to reach agreement and thus fails will the National Assembly alone decide on the adoption of the law.