In an incredibly hot, dry and inaccessible area in north-eastern Madagascar live white lemurs, which owe their name to the golden fur on their heads: the Golden Crowned Sifakas (Propithecus tattersalli). The secret kings of the north reach a height of just 95 cm with a weight of 3.5 kg, whereby still further 45 cm of tail come in addition. This makes them one of the smallest Sifakas. Their faces, feet and hands are always black and hairless. They were first discovered in 1974 by their namesake, Dr. Ian Tattersall, and were considered a variant of the Diademed Sifaka (Propithecus diadema). In 1988, biologists recognized that this was an independent species. 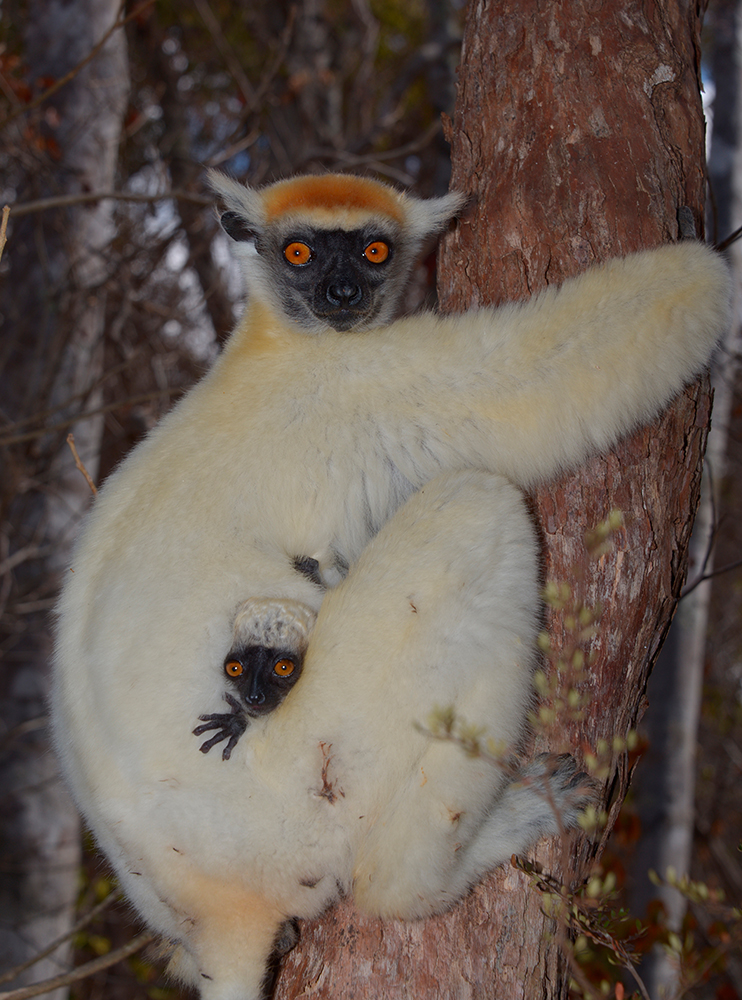 The habitat of the Golden Crown Sifakas is limited exclusively to a few small remains of dry forest north of Vohémar, bounded by the two rivers Loky in the north and Manambato in the south. The main distribution area is near the village of Daraina, always at altitudes well below 700 m.

Not much is yet known about the reproduction, communication and social structure of this highly endangered lemur, and much is based only on assumptions or observations of related lemurs. It is certain that Golden Crowned Sifakas live in social associations of three to ten animals. Usually these are two adult couples and their offspring of different ages. The females are the rulers of the clans, and decide about food, their own sexual partners and daily routine. The territory of a group occupies about 0.09 to 0.12 km². Confrontations between different groups take place with impressive behaviour, but mostly without physical conflicts. To mark boundaries, male Golden Crowned Sifakas use scent and urine markings – like many other Sifakas they have chest glands that discolor this area of the body darker. The ladies instead use their anal glands for scent marks. In the same region, Sanford’s Lemurs (Eulemur sanfordi) and Crowned Lemurs (Eulemur coronatus) are found among Golden Crowned Sifakas.

The families of the Golden Crowned Sifakas spend a lot of time caring for each other’s fur, caring for their young and of course the most important thing of the day, the search for food. The royal diet is purely vegetarian, ranging from the green of over 80 plant species to the occasional consumption of tree bark. Unripe fruits and seeds make up more than half of the food. Golden Crowned Sifakas live in a strict day-night rhythm most of the year. During the rainy season, however, foraging often shifts into the dawn and into the night in order to enjoy the high-fodder season as fruitfully as possible. 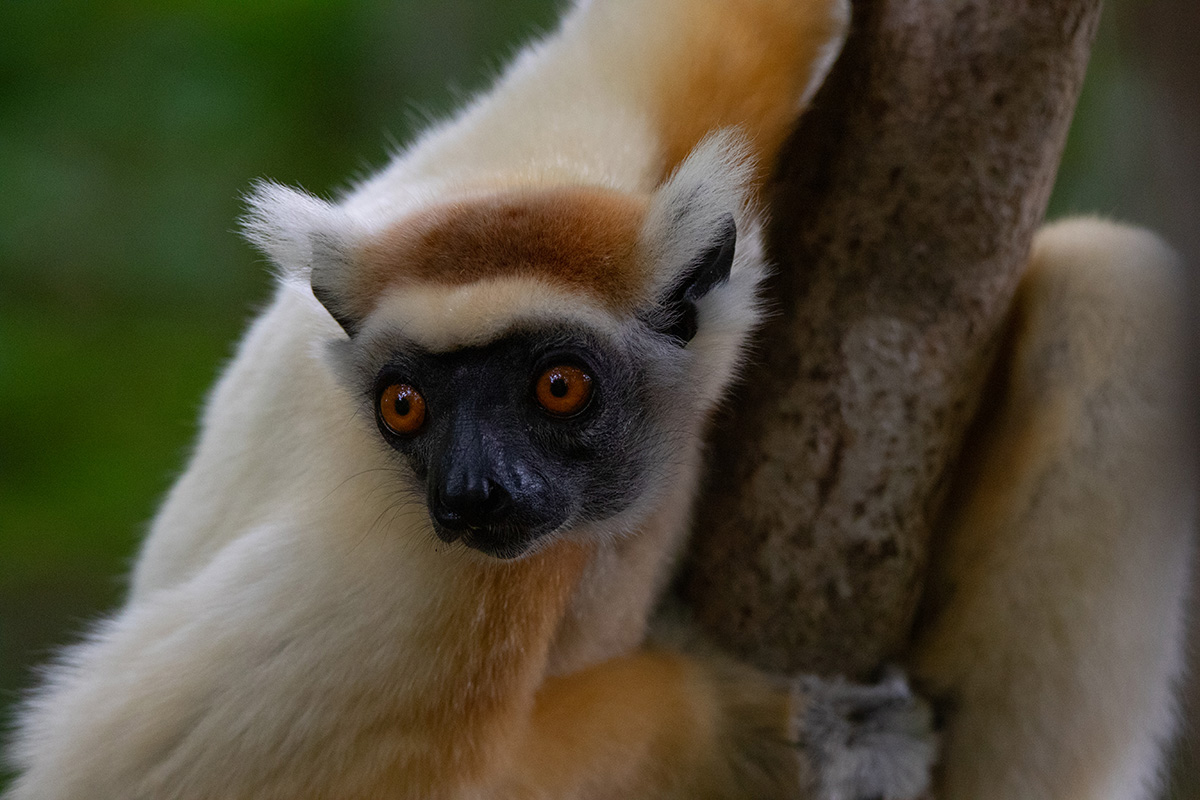 Golden Crowned Sifakas probably become sexually mature with two to three years. At the end of the rainy season, usually at the end of January, they mate. Females can only be fertilized once a year for a very short period of time, which severely limits the reproduction rate of these animals. After about five and a half months, a single young animal per group is born, which is taken care of by its mother for half a year. At first it hangs on her belly, but after only three weeks the young climbs onto his mother’s back, makes first excursions and can be carried through the big wide world.

To sleep, Golden Crowned Sifakas prefer to retreat to large, slender trees that tower above the canopy of the rest of the forest. Like in all primates, their communication is diverse and consists of gestures, sounds and facial expressions. Six different cries are known from the golden crown sifaka, among them warning signals like the “shee-fak” for attackers at ground level. During stress, the animals grunt and repeatedly emit “churr” sounds, which can turn into loud, shrill whimpering when constantly aroused.

Golden Crowned Sifakas have been on the IUCN red list for almost 20 years as critically endangered. Estimates already amounted to only 6,000 to a maximum of 10,000 remaining individuals in 2002. Only a tiny part of their habitat is under protection and is managed by the non-governmental organisation Fanamby. Unfortunately, this protection is only on paper, because people are already trying to dig for gold in this dry and barren region directly under the lemurs. The last remains of the dry forest are felled to preserve firewood or to build huts. If hunger becomes too much in the dry season, gold miners chase the lemurs because of their flesh – for the orginial locals, the akomba malandy (white lemurs) are fady, which means taboo. Despite the inhospitable conditions and the ever increasing threat, the Golden Crowned Sifakas cannot leave their empire – they sit on their trees like lost kings and retreat to the last remaining spots of forest. Soon nothing will be left of this unless effective protection of the land and a better infrastructure for sensible ecotourism are quickly put in place. Already now the Golden Crowned Sifakas populate the smallest habitat of all lemurs of Madagascar.