Min Sao is a simple noodle dish, which originally comes from Asia. It is most similar to Vietnamese Mi Xao, which simply means as much as “fried noodles”. In Madagascar, you can find Min Sao, Mi-Sao, or Misao (the spelling varies) on almost every small restaurant’s menu. Usually, you can order it with different kinds of meat (beef, pork or chicken, sometimes even shrimps) and with or without egg.

Cut off both ends of the beans. Then cook in boiling water for ten minutes. Quench under cold water, set aside. Cut zucchini and carrots into fine strips with a julienne peeler. Finely chop the onions. Also cut the chicken into very small, fine strips (less than finger thickness!). Beat the eggs in a bowl, season with salt and pepper.

Heat two pans with a little oil in them and fill a pot with water. In one pan, saute the onions, carrots, and zucchini. Put the zucchini last in the pan, because they have the shortest cooking time. Place the second pan on medium heat and add the beaten egg. Do not stir the egg! It’s supposed to be an omelet, after all. Be patient until the bottom is lightly browned and there is no more liquid egg floating on top. Only then you can turn the omelet. While the omelet is setting, remove the vegetables from the pan and set them aside on a plate. Use the same pan to fry the chicken. Season with salt, pepper, and soy sauce. Add the noodles to the boiling water and immediately add oil and salt. Cook for just a few minutes until they are still just firm to the bite. Drain in a pasta strainer.

Mix the still wet noodles directly with vegetables and meat in the pan. Don’t be afraid to brown the noodles a bit; they’re called fried noodles for a reason. Season with salt, pepper, and curry. Lift the omelet out of the pan, dab with a paper towel, and fold in half. In Madagascar, the omelet is served either on an extra plate with the pasta dish or cut into strips and draped over the pasta. Enjoy! 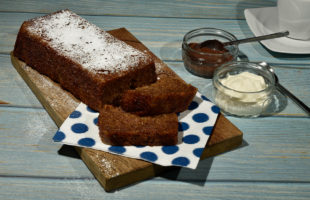 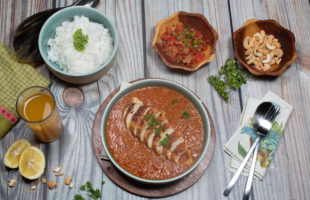