Where the name Vazaha for white people comes from

Zoky Be Traditions and legends

Once upon a time, long ago, a young king and his wife lived on the west coast of Madagascar, in Menabe. This king loved to speak before his people and to give Kabarys. One day, during one of his Kabarys, a baby started crying. When it wouldn’t stop and the mother couldn’t calm the baby, the king got angry. How could anyone have the audacity to interrupt such an important Kabary? Eventually, the king took his spear and killed the crying child. His people were horrified by the cruel deed and no longer wanted him as king.

So the young king packed his seven things, took his wife, and moved south to the land of Mahafaly. When they found a beautiful piece of land, they settled down and built a new kingdom. They named their first village Ampanihy. The king’s wife was soon expecting her first child, and she got a son. But the king could not find peace. Finally, he grabbed his belongings for the second time and set off with his wife to the east. The king’s son, however, remained and became the first king of the Mahafaly. 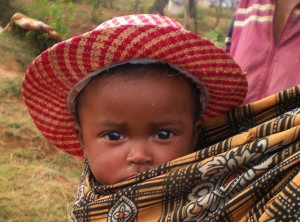 When they had found another beautiful piece of land, they settled down again and built themselves a kingdom again. The king’s wife had her second child there, and this one was also a son. But still, the king was driven by an inner restlessness. After a few years, he decided to move on with his wife for the third time. He left the new kingdom in the south to his second son, who became king of Antandroy.

The king and his wife moved further south until they came to the end of Madagascar. Before them lay only the sea, and finally the king had reached his destination. They settled down and built a third kingdom, and the woman bore a third child. Also, this was a son, and they called him Vazaha. But he was less fortunate than his brothers. As a young man, he went too far out to sea and was never seen again. The king and his wife went to the beach every day to wait for their son’s return. But he never came back.

After many, many years – the king had long since become old – a boat appeared on the horizon. There were many people on it and they waved to the coastal people. When the old king discovered the boat, he believed that the children of his lost son had returned from the sea and joyfully shouted: “Look, Vazaha! Vazaha!”. When the boat reached the shore, the newcomers’ skin color was white. Since then, white people in Madagascar have been named after the prodigal son, Vazaha.

Why the roots of the baobabs reach for the sky

A Malagasy legend tells that there were times when the trees could still walk. At …